While many students enjoy playing video games, is it possible that making video games can play a key challenging role in engaging students’ attention, and developing core skills needed for learning STEM subjects? There’s a lot more to games than simply being fun, but as they are increasingly used as an introductory tool to programming within the STEM curriculum for teenagers, and in a more creative design capacity at University, does the fun element extend to learning, and are the challenges of game design of importance in the classroom? To understand this, we surveyed 150 educators who use GameMaker Studio 2 to teach game programming. Here’s what we uncovered… 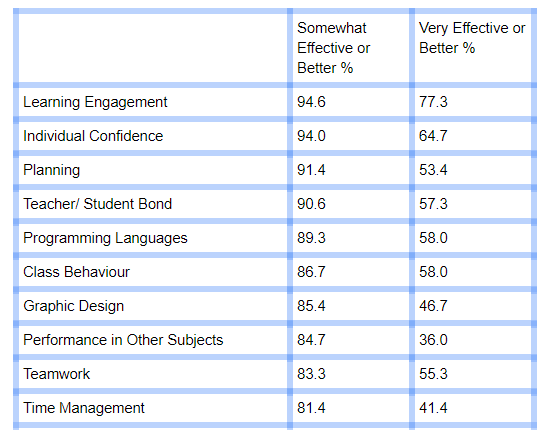 From there, we asked educators to evaluate these effects on a semantic scale ranging from extremely effective, to not at all effective. By some margin, the most beneficial impact that teaching game design had was on learning engagement. A participant response of 77.3% said the teaching of game design had been either “extremely effective” or “very effective” at engaging with students. “I do generally see a higher level of engagement,” said Terry Watts, a secondary school teacher at Cotham School in Bristol. “Students are proud of their end product and like to show it off to peers, staff and family more. It also reveals the students that have a real aptitude for programming as a game is open-ended and these students often go beyond the core teaching to extend their games further.”

Overcoming the unique challenges of making a game, along with the high level of peer engagement required to communicate and evaluate concepts led to the teaching of game programming having one of its most positive impacts in enhancing participants’ confidence with 64.7% of educators said it was “very effective” or “extremely effective” at improving students’ individual confidence.

The making of a game is an open-ended exercise. There’s no manual on how to program an original game since the concept you’re programming is unique to the project. As such, students need to think creatively, set their own parameters and seek out answers themselves, rather than follow a specific guide. This process can be incredibly empowering.

“I see the positive results of being stuck because there aren't clear answers to their design questions, which is a positive experience in the end, but at the time manifests as frustration,” said Mark Suter a high school Computer Science teacher in Elida, Ohio. “I simply remind them that it's okay to be stuck, and help develop their problem-solving skills, such as properly using forums to find answers rather than immediately seeking me out.”

The teaching of game design provides teachers with an ideal opportunity to take a facilitative approach to classes, and for students to expand their peer associations. There’s no rights and wrongs, and the students have the power over the final outcome. To make progress students have to open their minds to ideas coming from all places, as pre-conceptions are left to one side, replaced by critical evaluation in an open, trusting environment.

For Hana AlJaberi, it was the added relevance and immediacy of games that made them a more palatable field of study than most other subjects. “They love GameMaker. To begin with, they are overwhelmed by the project because they have to start thinking about many unfamiliar concepts,” she said. “It’s empowering, it makes them feel like they can do something. Unlike other courses, they can see the results immediately, not have to wait until they are in the world of work.” This is especially open-ended for the class’ final project, where after making a series of tutorial prototypes, they’re let loose to use their newly acquired skills to create any game they want.

It’s not surprising that learning engagement, individual confidence, and improving the Teacher / Student bond were the most beneficial effects of teaching game development. Games are fun and students like them! So it makes sense that teaching young people how to make games would engage their interest. That also explains why many students were more engaged in this realm of study, as it’s something they’re passionate about and likely to take more seriously than some other subjects that don’t seem relevant or interesting them.

Leading on from this, teaching game design also had a beneficial effect on improving class behaviour, with 86.7% finding it effective, and 58% finding it “very effective” or extremely effective. “The kids are happier in class, there aren't behaviour problems like in other classes,” said Kim Hansen, a high school teacher in Vancouver Washington. “Other teachers even comment that I seem happier when I teach Video Game Programming than when I teach math. I'm much more relaxed and I think that contributes to the kids feeling better about the class. We are all there because we want to be there so everyone is happy about being together.”

Of course, teaching game development is a great way to learn how to code. Of the educators we surveyed, 58% said games were either “extremely effective” or “very effective” at teaching programming languages. We were surprised this wasn’t a little bit higher, but that’s because not all students persevere past the first hurdle. Mark Suter said of his high school pupils “There is a start of high engagement because there is lots of game playing, analyzing, prototyping their own games, then as they get into developing their own games, engagement can slightly dip because there is a real challenge in creating what they envisioned, lots of learning programming concepts… For some, they mistakenly associate game design with something easy and are frustrated when it isn't. Engagement swings back up again when they start to master the software to make it do what they want, and see progress in making their own game.” Ben Rivers, Instructor at OCAD University and maker of games Home, Alone With You and Worse Than Death said “They either have to engage on a pretty high level or they don’t survive. No one can coast in this class; they either screw up a lot or they really hit the pedal and excel.”

One reason game programming is so effective is the way that it’s taught. The vast majority of our Educators said they let students make their own games, with the teacher being available for advice. Many of our survey participants said that students would actually go out of their way to pursue their game developing dreams through extracurricular activities. “We started a games programming club that takes place on Fridays after school. This, in turn, led to a cross-curricular project that saw students building and programming their own arcade cabinet for the school,” said Watts of his enthusiastic Bristol pupils.

Kim Hansen noted that while she teaches both math and computer science during the proper school day, she also offers an after-hours program focused on making games for a state competition (in this case the Oregon Game Project Challenge). “It's somewhat informal like a club would be,” she said of this group. “There isn't exactly a set curriculum for it.”

Some students are very passionate about pursuing a career in video games, but that’s not the main benefit of teaching game programming in the classroom. Indeed the tools used in game development translate to other fields of study. “Even if students don’t want to go into the video game industry, game design teaches both technical skills and the creativity students need to thrive in today’s global digital workplace,” said Nikki Navta of Carnegie Learning.

While there are myriads of benefits to teaching games programming, it’s clear that the biggest boon is how much it engages students. This is fantastic news for teachers who want to get their students excited about the challenges of STEM curriculum subjects.