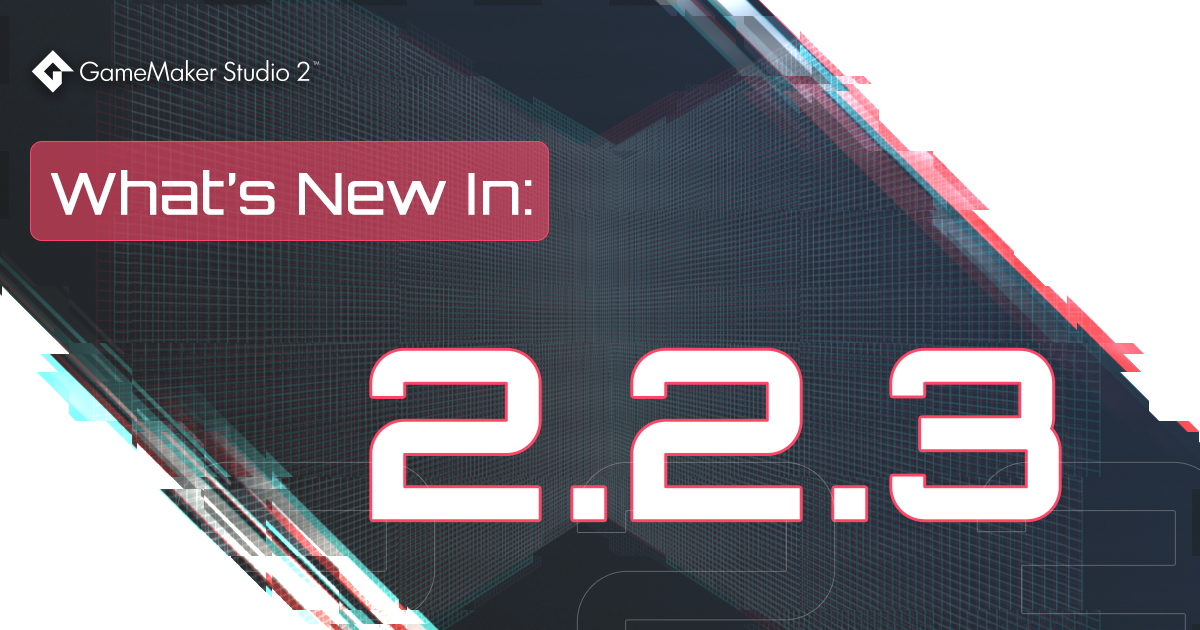 GameMaker Studio 2 update 2.2.3 is now in Beta. In this article, we'll be discussing the changes, bug-fixes and features in this update. As well as a number of new features, it also contains multiple important stability and quality of life fixes that we think you'll all appreciate, as well as a brand new target platform: Apple's tvOS!

To start with, we have a fix for the white-screen / crash-on-load issue that has affected Windows users. This issue would give you a white screen if you opened the Marketplace or the Manual, or it would cause the IDE to lock up if you tried to open Explorer. It also fixed a number of startup issues at the same time, meaning launching GMS2 should be a far smoother and more reliable process now.

We've also added in improved debugging for IDE crashes and a new one-click crash reporter tool. Now, if the IDE has a fatal error on startup you will be shown the following window: 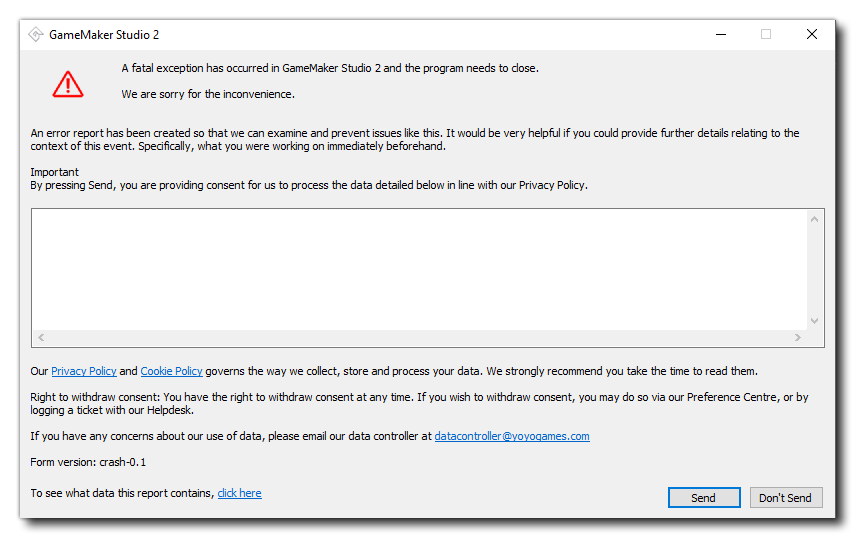 This window gives you the option of sending us a crash report and including details of what was happening at the time of the crash. This feature streamlines the error-reporting process, as previously you would be required to file a Helpdesk ticket with a lot of back-and-forth communication as we asked you to attach files, etc. This new system makes things far quicker and easier for everyone, as now it's simplified to only one click from you and we'll get all the info we require sent to us automatically in the first message. You can find the exact details of what is being sent and further info in this Helpesk article: Submitting a Crash Report - What Does This Contain

As mentioned in the introduction, 2.2.3 includes a new target platform for your games tvOS from Apple, and this is now included as part of the Mobile plan:

Creating and building for the tvOS target is remarkably similar to the process for working with iOS, but also enables you to access the innovative "Siri" controller that tvOS uses in your game. This controller can be used as a touch screen, a mouse pointer and a gamepad, so you may need to do a bit of adapting to existing projects to get them working correctly, but - in general - if it runs on iOS it'll run on tvOS! As part of the addition of this platform, we've introduced new gamepad functions - gamepad_set_option() and gamepad_get_option() - that help with the setup of the Siri controller.

To get you started with this new platform as quickly as possible, we have created the following helpdesk articles:

The 2.2.3 update also brings with it a number of other minor features and additions:

Finally, for those of you that build games for the different consoles, the 2.2.3 release brings updates to the PS4 SDK and the XBox One SDK. These have now been updated to versions 6.500 for the PS4 and July 2018 QFE6 for the Xbox One. This update should have no consequences for anyone and is purely an internal runtime update.

That's about it for the 2.2.3 release. We had "IAP Extension Revision on All Platforms" listed on our Roadmap but this has slipped to 2.2.4. We hope that this update improves your workflow and increases the stability of GameMaker Studio 2, especially on the Windows platform.

Also note that, as usual, there will be a thread on the GameMaker Community Forums for this release, and we would request that any initial feedback or help request be discussed there. Any bugs that you find should still be reported to us through our contact us page.