Hi there! This blog post is all about creating a game with multiple interconnected levels -- we’ll learn how a new level is created, how multiple rooms can be connected and how a room’s data can be saved so it remains in the same state when you leave and return to it. At the end of it we'll also create a fade transition that smoothens the switch between levels!

The base project is a simple top-down adventure game where we’ll create multiple rooms that are joined together. Any concepts and code from this blog can easily be applied to a platformer as well.

You can simply create a new room and fill it in with instances and tiles: 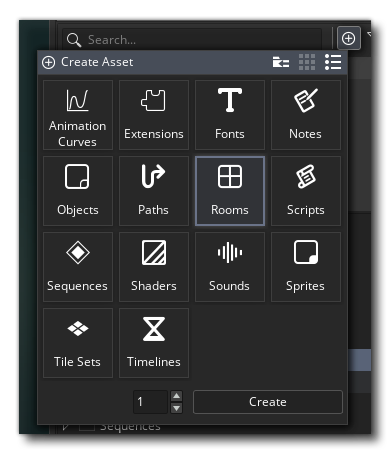 Alternatively, you can save time by duplicating your existing room and modifying its contents: 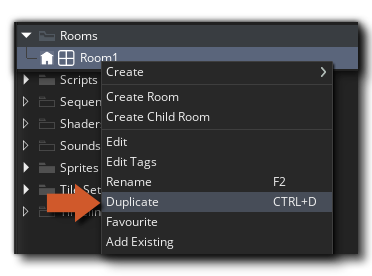 We’re going to make use of two objects for changing the room: an “entry” object and an “exit” object.

Essentially, the player would walk into the Exit trigger and come out in the other room at the location marked by the Entry point.

First of all we need an object for the entry point, which we’ll call oEntryPoint: 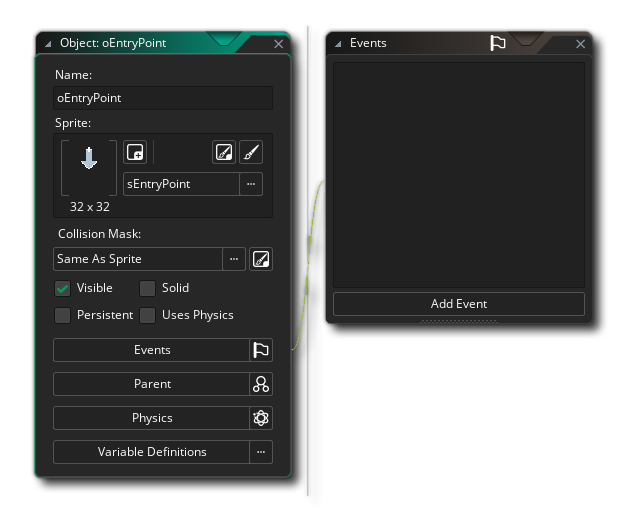 Then we’ll create an object for the exit trigger called oExitTrigger: 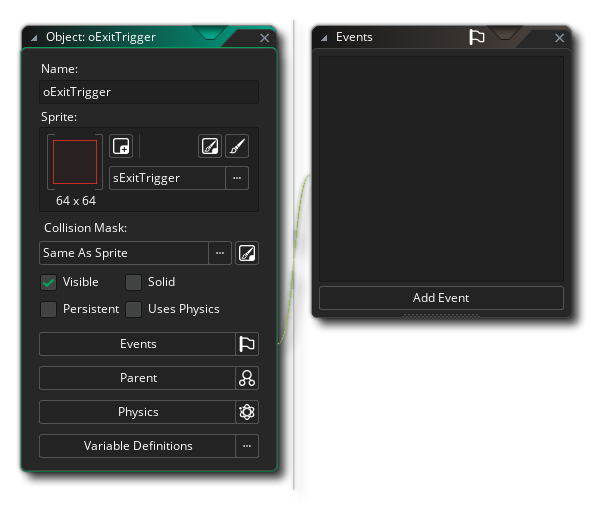 In the exit trigger object, we’ll create some variable definitions:

Since the targetRoom variable stores a room, you can click on the

cog icon and set the filter to “Rooms” so that only rooms can be applied to this variable. 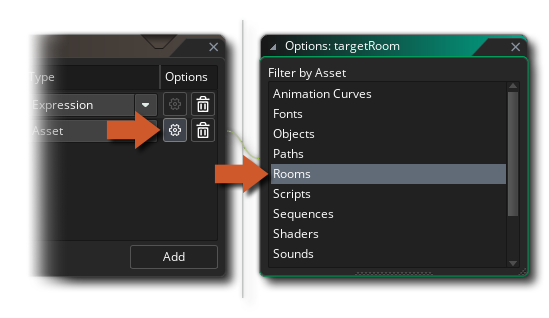 You can now place an entry arrow into your second room, double click on it and give it a unique name: I’ll call it room2_arrow1. 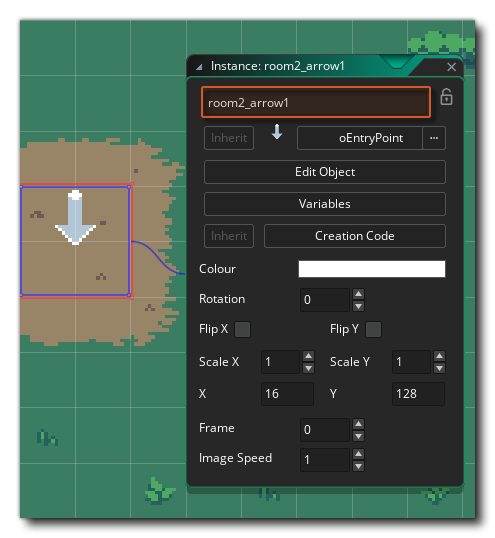 In the first room, place an exit trigger, set its target room to your second room (in my case, Room2) and set the target instance to the arrow you just placed there (room2_arrow1).

This trigger instance now knows which room it should switch to, and the exact entry location where the player should be placed. We’ll make use of a “room manager” object to carry the ID of that entry instance from the current room to the next.

We’ll create an object called oRoomManager and make it persistent: this way, it won’t be destroyed when a room ends and will always stay active. This means its variables also won’t reset when the room is changed, making it useful for carrying data between rooms! 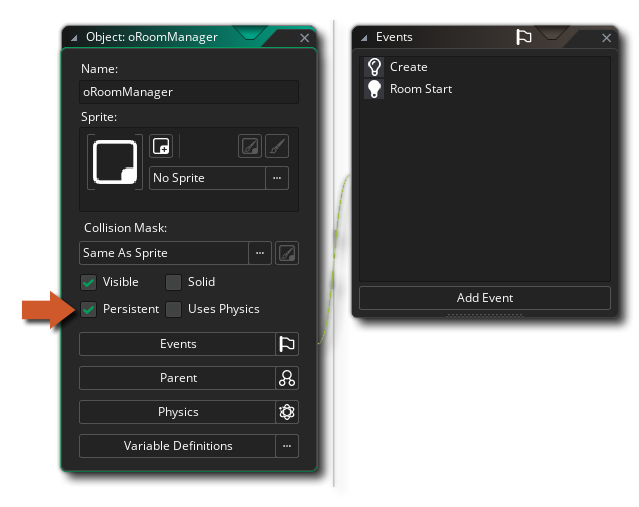 This object will have two events: Create and Room Start. The second event can be found under “Other”: 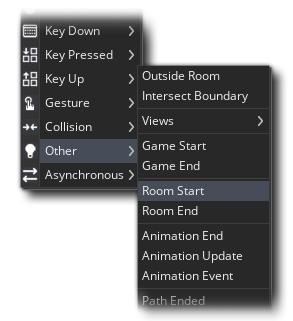 This variable will store the ID of the entry instance where the player will be placed. When we enter a room, it will look for the instance stored in this variable and put the player there. For that, we’ll need the Room Start event.

This checks if the instance stored in the targetInstance variable (if any) exists in the room. If that is true, it executes its block of code.

This will now handle moving the player to the correct location in the new room, but we still need to allow the player to change the room through the trigger. Let’s work on that now.

In the player object, we’ll first create a variable in the Create event:

This will store whether the player has “entered” the current room yet. It’ll be used to prevent the player from interacting with a trigger immediately after it enters a room, if it happens to spawn directly on a trigger. In such a case, it would have to exit the trigger area first and re-enter it. 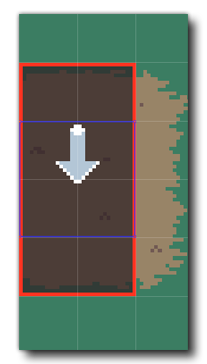 We’ll handle this in the End Step event with the following code:

We’re checking if _exit is equal to noone because the instance_place function returns noone when it doesn’t find an instance; when it does, it returns its ID.

For exiting the room, we’ll code interaction with the exit trigger in the same event, after the previous code:

If the player has entered the room and an exit trigger is found, it does the following:

All of this will allow the player to switch to the room stored in the exit trigger it touches, and the room manager will position it on the correct entry instance when the new room starts.

You can now disable the “Visible” option of your entry and exit objects so they can’t be seen in-game.

You can use this technique to create endless amounts of connections between multiple rooms. As a simple example, we’ll create another connection between the current two rooms to allow the player to go back from where it entered.

In the first room, I’ll add a new entry arrow in the same place as the exit trigger and name this room1_arrow1. 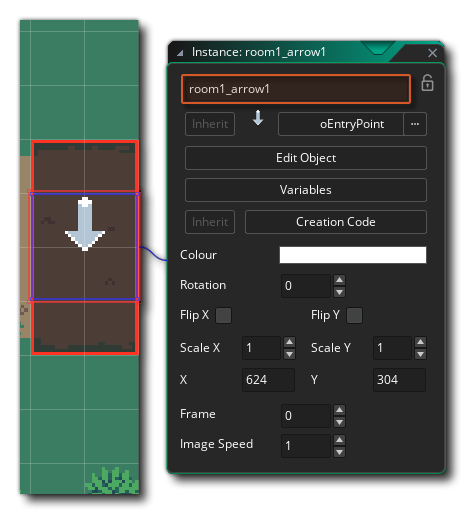 I’ll now add an exit trigger in the second room in the same place as its entry arrow, and tell it to go to Room1 and target the room1_arrow1 instance:

This will now allow the player to go back and forth between the two rooms from the same spot, and because of our enteredRoom variable, it won’t trigger the exit area immediately on entering a new room:

You can repeat this procedure to create multiple pathways between many rooms!

By default, if you leave a room and come back to it, its state will be completely reset and all instances will be re-created. This means that if you defeat enemies in a level, go to another room and then come back, the enemies will respawn.

A simple fix for this is to enable the “Persistent” setting for your rooms, however it may not be the best solution as it doesn’t give you complete control over which objects respawn and which ones stay “defeated”. We’ll implement a custom solution to save instance data into memory and load it when a room is entered into.

We’ll create a new script, remove the function block and add this there:

In my project, I want the enemy and coin states to be saved, so I’m entering their object IDs into the objectsToSave array. As you can see, you can specify a parent object to group multiple objects together.

Then we have the roomData array which is empty by default and will be populated by the room manager.

The roomData array will have an array for each room, and a room’s array will store a struct for each instance, containing its data. We’ll create constructors for such structs, which can easily be expanded upon to store data for specific object types.

In the same script, we’ll add this:

This is a simple constructor that takes an instance ID and stores its x, y, depth and object index into variables, all of which are necessary for recreating it. That is handled in its Create() function which simply creates a new instance using the data stored in the struct and returns its ID.

We can now expand upon this constructor to store more data for a specific object type. As an example, I’ll create one for storing an enemy’s data which includes an additional hp variable:

This constructor inherits from InstanceData, so it’ll keep all of its behaviours and variables. Additionally, we’re pulling the hp from the given instance and storing it in a variable. We’re then storing the Create() function from the base constructor (InstanceData) so it can be called in the new Create(). This new function calls its base variant, which creates the instance, and then applies the stored hp to the newly created instance.

This means that for any regular instance, we would use InstanceData to create a data struct, however for any enemies we would use EnemyData.

We’ll now save the room’s data when it ends, so its state can be restored when the player returns to it.

In the room manager object, we’ll add the Room End event and add this there:

The first line creates an empty data array for the current room, or resets it in case it already holds data. Then it gets the length of the objectsToSave array which stores the IDs of the objects that should be saved.

The for loop then goes through each object in the array and runs a with() statement on it. This makes its following code block run for all of its instances in the room, so, for example, if the object ID is oEnemyParent, then the with block will run for all Wolf and Bat instances.

Inside the block, it creates a local variable for that instance’s data. If the instance is a child/descendant of the enemy parent, then it uses the EnemyData constructor to create a struct; otherwise, it uses the base InstanceData constructor.

At the end of the block it pushes the instance’s struct into the room’s data array. This way, the data array will hold a struct for each instance that was saved. We can now load this in the Room Start event!

In the room manager object, we’ll open the Room Start event and add this there:

This checks whether the room data array has a slot for the current room and whether that slot holds an array. If this is true, it runs a block of code to load the data from it.

Before loading the data, we need to destroy any instances that currently exist in the room as they’ll be recreated. So in the block, it first loops through the objectsToSave array and destroys all instances of those objects. Then it gets the data array for the current room, loops through it and calls Create() on each entry, which will create the instance using the data stored in that struct.

That’s it! Any objects you entered in the objectsToSave array will now be saved once a room ends, and they will be restored when you enter that room again:

Finally, we’ll show a simple black fade transition when going from one room to another. For this, we’ll need to create the following variables in the room manager’s Create event:

fade is the alpha of the black overlay, and fadeDirection controls where the fade value is going. Since it’s -1 by default, it means the fade is going to decrease and eventually reach 0.

We’ll add the same code to the Room Start event so it starts by fading the room in:

Then in the Draw GUI event, we’ll draw the black overlay and modify the fade value:

You can see that the fade variable is being modified according to the fadeDirection value. When we set it to 1, the fade alpha will increase instead of decreasing.

We now need to modify the last code block in the player’s End Step event -- instead of changing the room immediately, it should start a fade and store the target room in a variable, and then use an alarm to change the room later.

Setting the fade to 0.01 starts the fade process as it becomes greater than 0, and setting the fade direction to 1 makes sure that it keeps increasing, fading out the room.

In the conditions at the top we check if Alarm 0 is deactivated, and then set it to run after 25 frames, which changes the room to the target room:

Going to another level now feels much better with the new transition!

You can now use all of the techniques covered in this tutorial to expand your game, whether it’s a top-down RPG, a simple platformer, a metroidvania or any kind of game that requires multiple rooms to be connected!

Let us know what you thought of this blog on Twitter @YoYoGames, and remember to use the #GameMakerStudio2 hashtag when sharing your creations with the world. You can also hit me up at @itsmatharoo if you have any technical questions.