Skelattack is an indie platformer game where you are Skully, an enchanted skeleton, living in the deepest part of the dungeon. David Stanley, Studio Technical Director at Ukuza, has written the following blog about his journey developing the game. We hope you enjoy it and find it helpful!

The path to making Skelattack full of life has been a 3-year journey. When I set out in 2015 to work on my first GameMaker project, I had no idea where it would lead. So as we begin to see the end of development we are going to reflect with this blog. Below are a few of the fun features we’ve implemented along the way that will hopefully keep players engaged in our world, where mystery and danger lurk around each corner! 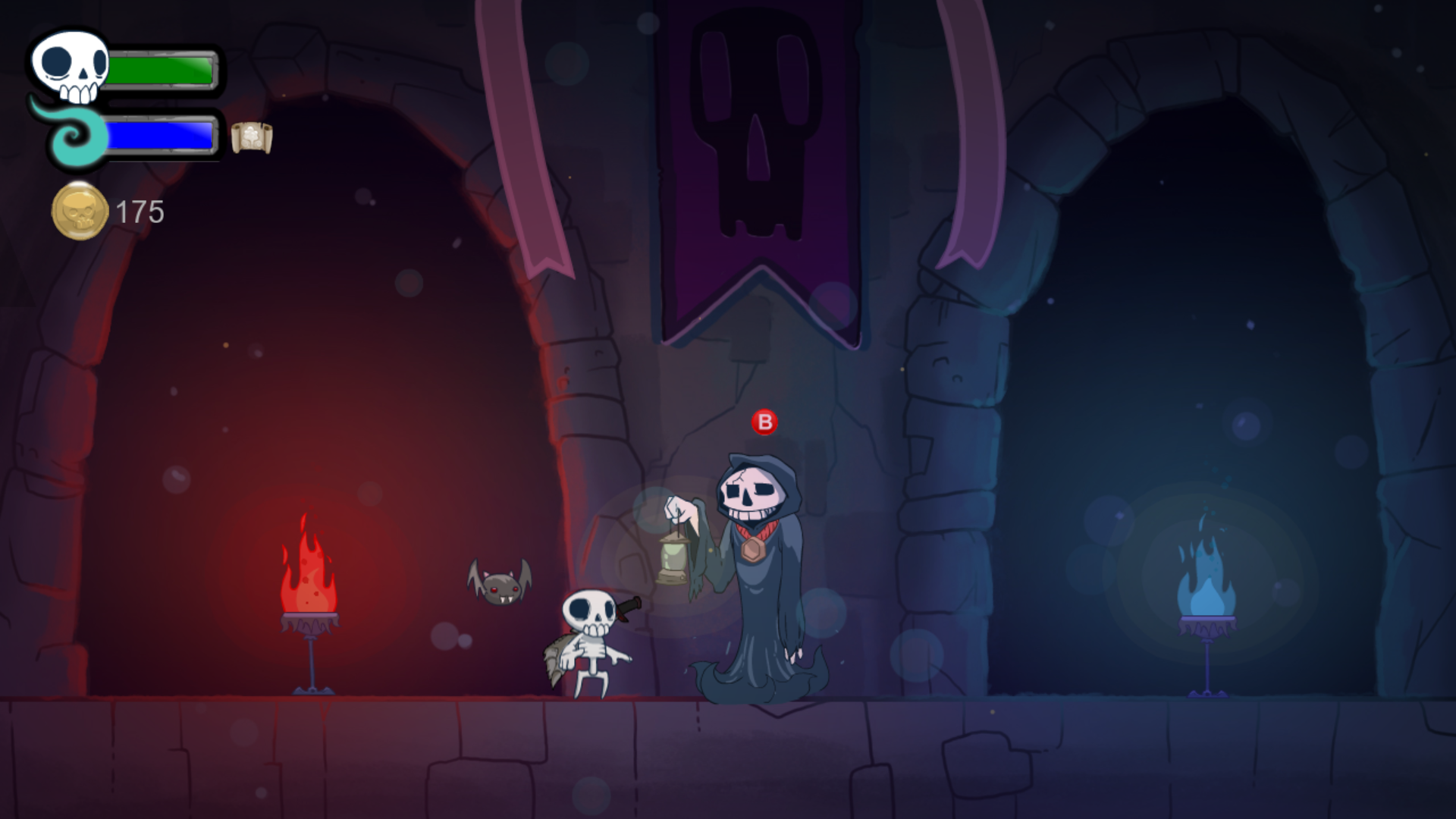 The general damage system for enemies is almost as old as the game itself, and one of my first big hurdles as I was learning to program. I realized from a very early stage that having enemies who always took the same number of hits to defeat was a little boring and predictable.

So, with this system we see random number generation doing the bulk of the work. As your attacks connect with an enemy, a number within a range is rolled randomly. This number is then subtracted from that enemy’s health. You could have this range as wide or narrow as you need…you could even have a big fat 0 in there too, to signify a complete miss! I avoid rolling 0 completely in Skelattack, as it seems unfair during close-quarters fighting.

But that’s not all! How about some Critical Hits? Prior to the rolls, we are executing for base damage, we do a separate roll to determine if it’s going to be a Critical. The chance is slim but super satisfying and deadly. A player who gets lucky with Criticals will make quick work of most enemies. It will also have some implications for speedruns. 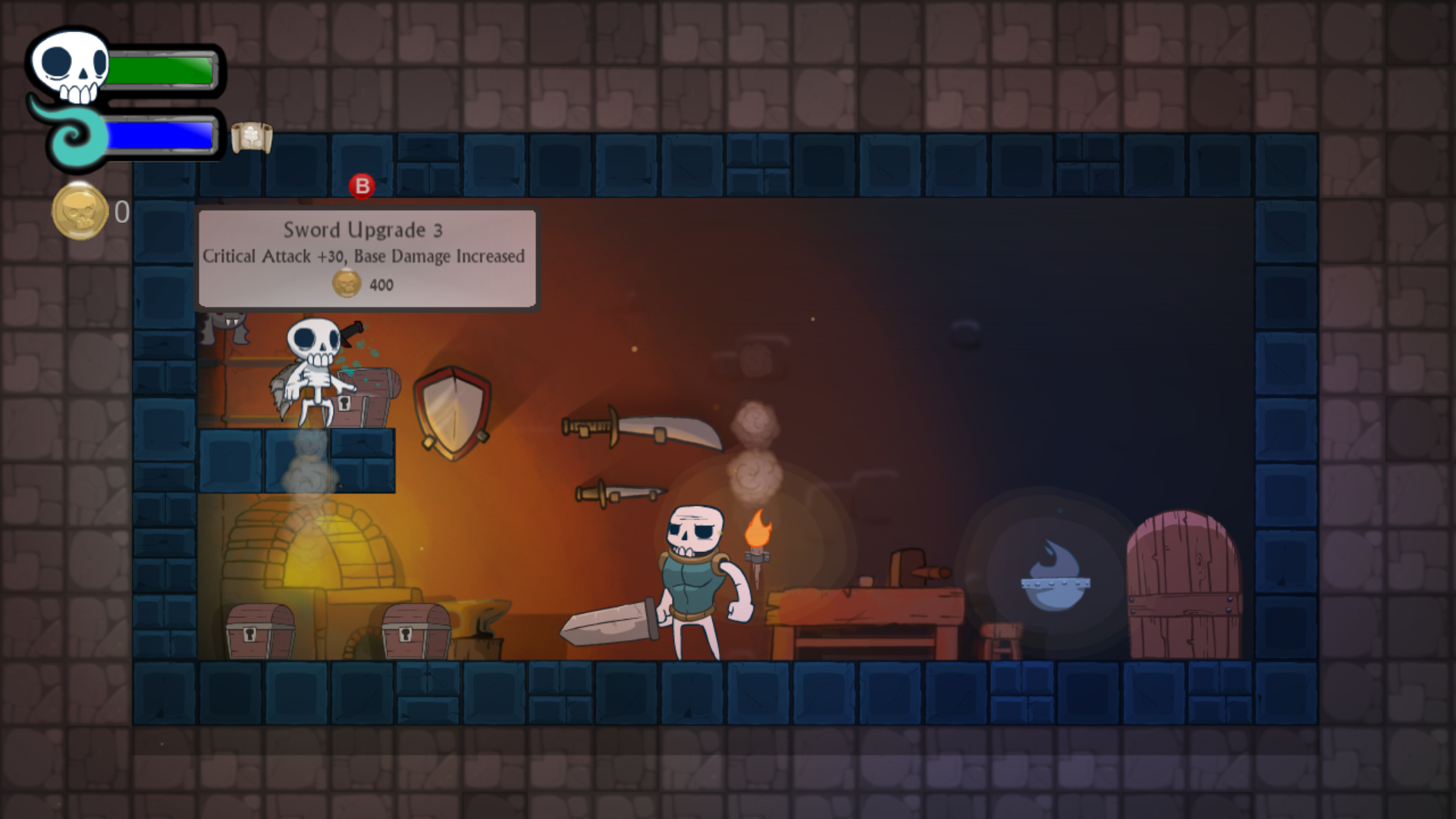 Still not done here…Skully can upgrade his legendary Bone Blade at the Blacksmith to increase his base damage as well as the critical damage. Be prepared to lay down some serious coin to get the best upgrade! Thankfully the dungeon is ripe with treasure if you know where to look.

I use a harmless straw dummy to teach all these mechanics to players in a safe environment. 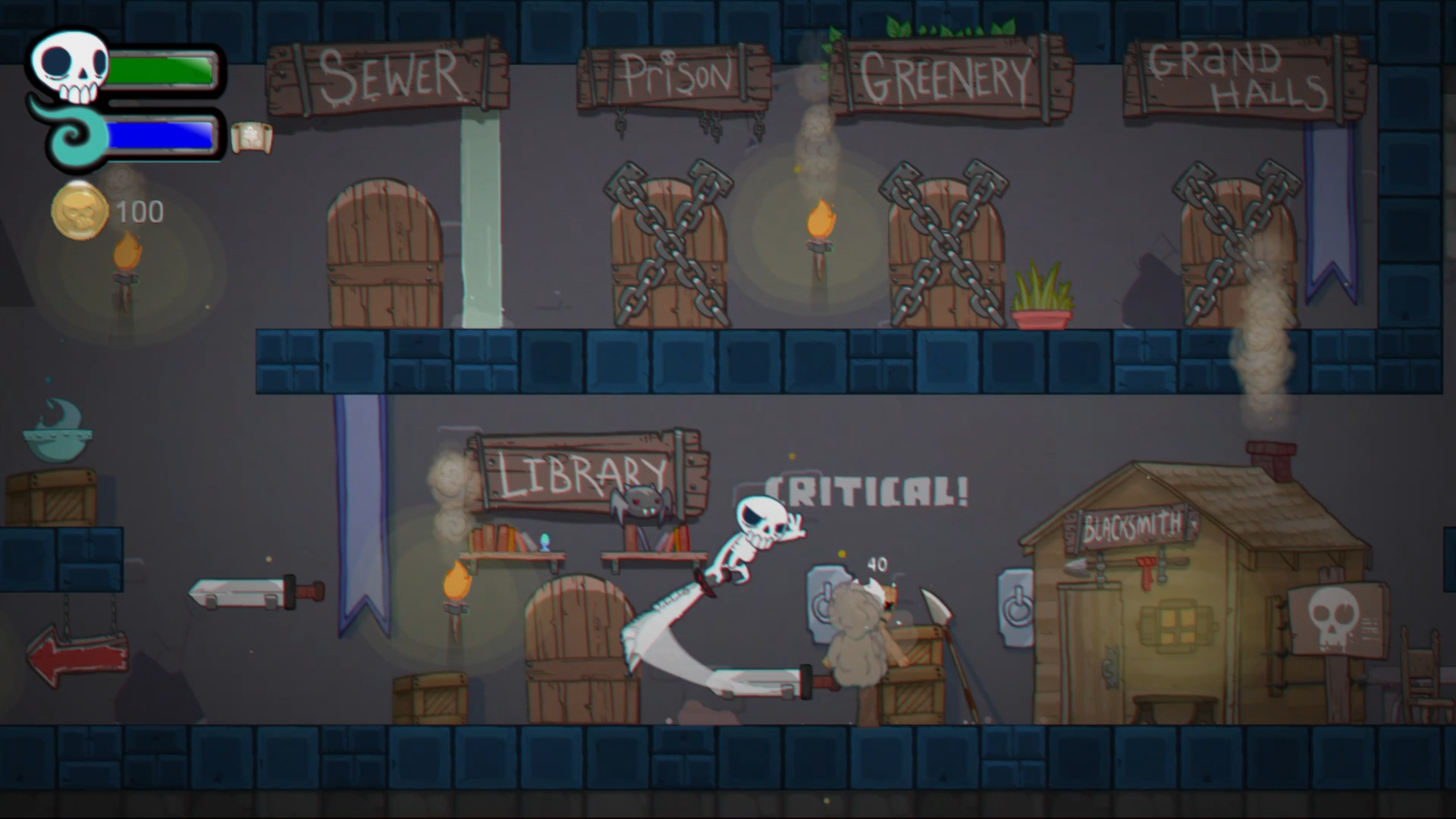 This one seems like a no-brainer, but it wasn’t added to Skelattack for a very long time. It was incredibly simple to set up, thankfully. It relies on random number generation that takes place the instant your sword attack connects with a Knight (much like the damage rolls mentioned previously). We roll a number on every attack and after some testing/balancing, we’ve found that a 2 in 5 chance to parry works well with this game.

I drew a unique sprite for when the Knight parries your attack, to make it clear that you’ve been blocked. The sound effect that plays is different as well, a satisfying metallic hit that doesn’t sound like you’ve connected with flesh. 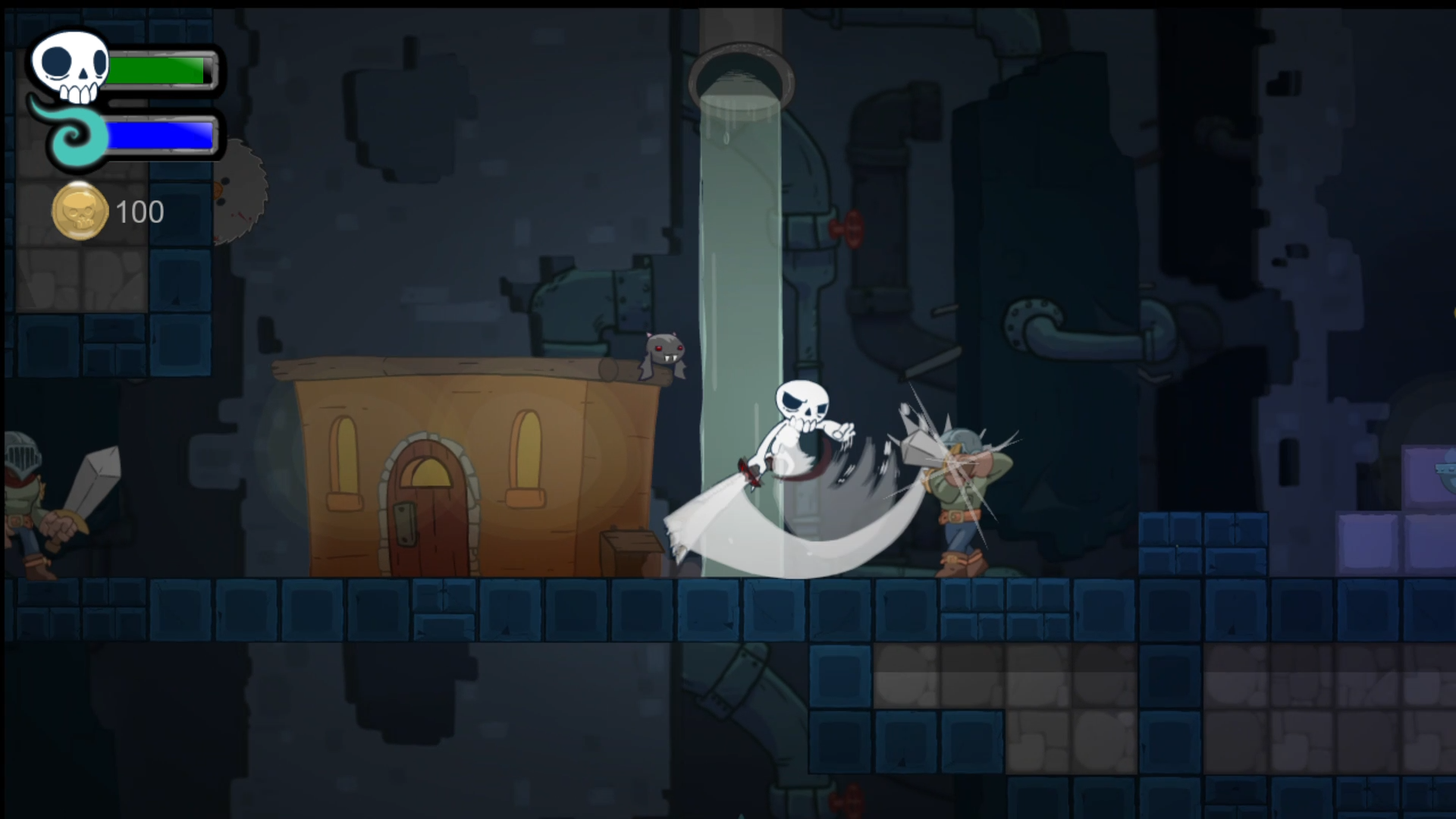 Imber, your faithful and mouthy bat companion, has been with you from the start. She quickly rose up to be a fan favorite due to her cuteness! The team decided that Imber needed to have more abilities to fully show her as a wonderful companion and a powerful asset.

The first you’ll see is that she will cast all your magic spells for you. It’s a simple bit of trickery in my opinion, as the inputs and the effects of using magic are the same as if Skully cast it himself. But having Imber be the sole keeper of the magical spells makes her so much more endearing.

She will also latch onto your shiny skull and carry you across huge areas that are too dangerous to traverse on foot! The play style of the game completely changes in these sections, which breaks up the platforming/swordplay nicely. Wall-sliding is out of the question here as Imber takes control. Fly carefully! We saw a great response to this mechanic when we took the game to PAX South. This made us consider all the other things we could have her do… 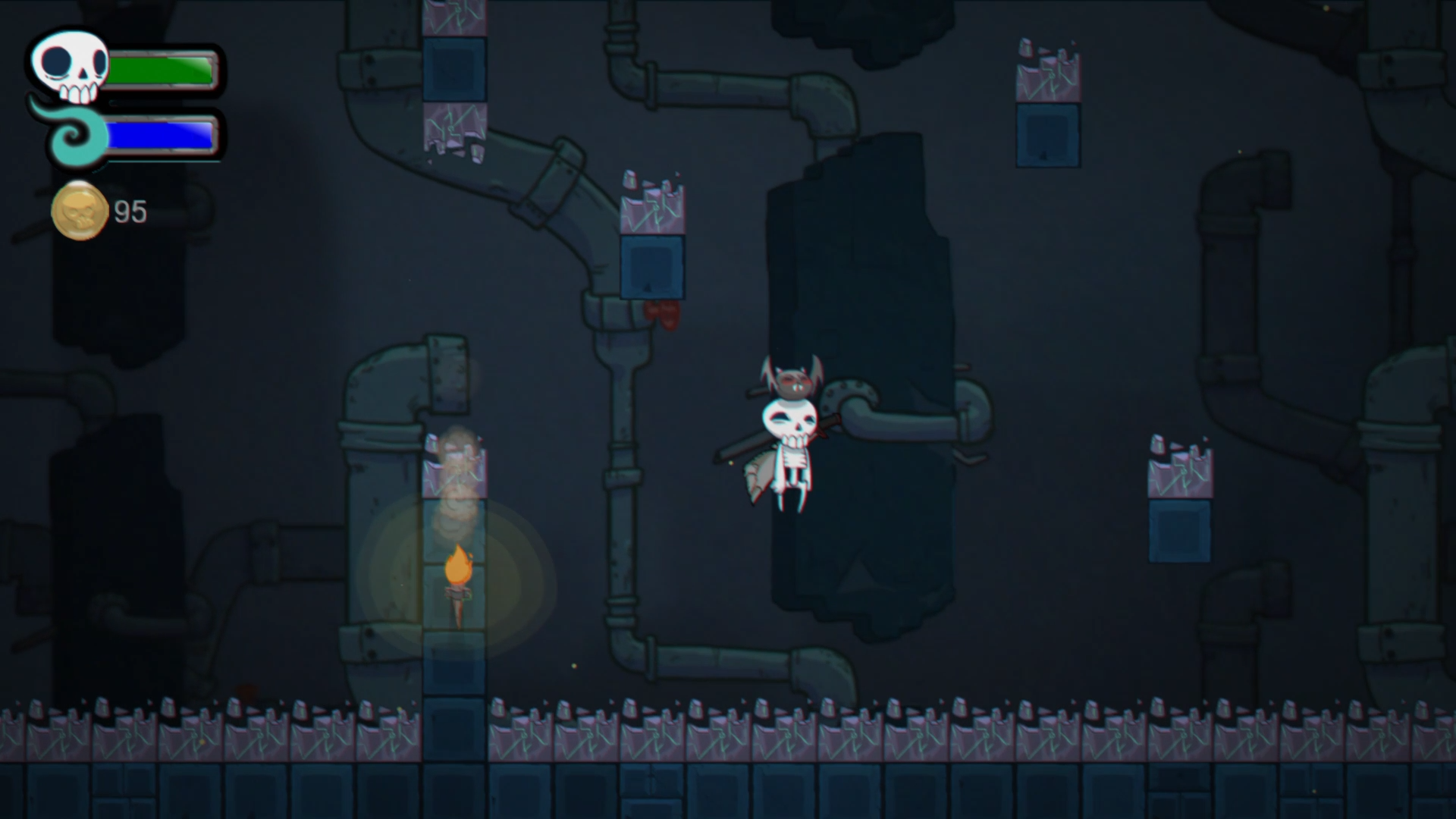 The next natural step seemed to be an Imber Solo feature. We thought about what that might mean, to have her break away from Skully briefly, what rules we’d need to have in place for such a thing. Envision a tight crawlspace too small for Skully to enter. This is where Imber takes over, flying by herself through dangerous areas, to flip switches and open paths for her pal. He will wait for her if it takes, so just meet up with him again and regain control of the Bone Man!

This isn’t a crazily complicated feature either, but it’s incredibly valuable from a character development standpoint. Imber isn’t just a voiceless companion. She is as useful as Skully and has so much loyalty to her fellow dungeon-dwellers.

Skelattack is looking to release in 2019 and if it's caught your eye you can follow all the progress over on the very active Twitter account here: https://twitter.com/skelattack

Skelattack is also featured on our showcase!